I'm not sure how I ended up Catholic. Especially when I look at all the sincere, holy, loving Protestants in my circle of friends and family who would LOVE the Catholic Church, if they looked too closely (careful!). I can only think it was a fluke.

I wasn't looking for a change: completely content with my Denton Bible Church friends, in a wonderful small group, on the register for the greeting ministry, choreographing for the dance ministry, always asking friends to join me at church events, and I felt the closest I ever had to Jesus.

But of course I felt close to Jesus. The faith that believes He is God-Incarnate-Crucified-And-Resurrected-From-The-Dead was easy in my sector of the world. Most of my friends were Christians, the small group meetings were dynamic, the large group events were entertaining, the leaders were inspiring, the people were welcoming.

Perfectly content, an awesome Protestant life scripted out for me, and then God shakes it all up when He opens a window to Catholicism. Why let me glimpse in?

There are so many people who are truly deep, intellectual, spiritual, and wise, and there are so many breath-taking conversion stories: Francis Beckwith, (current) Baylor professor and (former) president of the Evangelical Theological Society; G.K. Chesterton, one of the 20th century's most renowned writers; Tony Blair, who waited until the completion of his term as prime minister of England; T.S. Eliot, another literary convert; Dave Brubeck, a jazz musician who found the Church through music...

Of all the Protestants who would overflow with love for the Church we weren't aware Jesus built, somehow, I get pulled in. And the impetus wasn't a profound intellectual, spiritual, musical, literary event; I was just a Protestant girl dating a Catholic guy (after some serious discernment whether he could be both Catholic and Christian).

So why me? I'm still surprised to be here.

In a call-out to "The Office" -- a show that used to be oh-so funny and now just refuses to die -- the bumbling accountant shares a surprising insight when his team of losers wins trivia night (despite being the coworker whose work has to be double-checked at the end of each day):

"Look, I know it's easy to say tonight was just a fluke, and maybe it was. But here's a piece of trivia: A fluke is one of the most common fish in the sea. So if you go fishing for a fluke, chances are... you just might catch one." 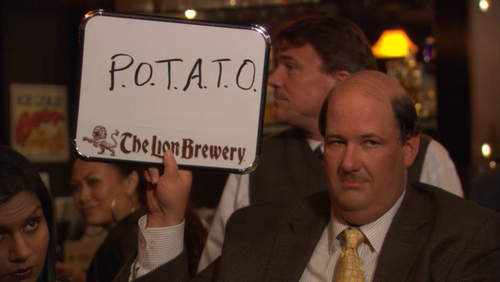 I feel like God let me slip in a side door, since my arrival in the Catholic Church was more a stumbling than a pursuit, and that kind of entrance hardly seems worthy of something so beautiful. But then again, St. Paul did say Christ crucified would be a stumbling block for many.