Salt Lake City! And Southern Utah! And Hey, The Grand Canyon Is Kind Of Close!

Salt Lake City was not anywhere on our bucket list of places to visit. 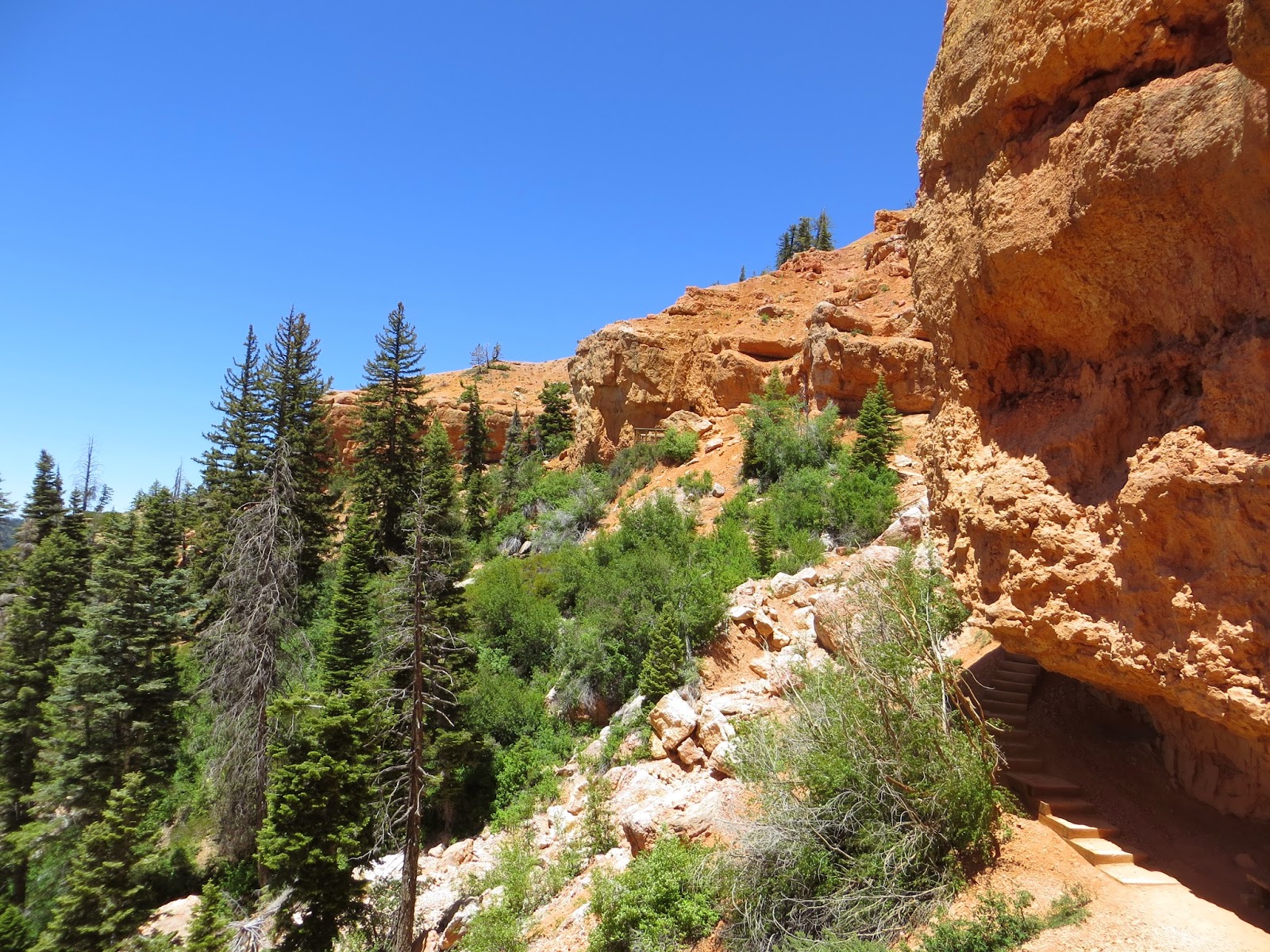 We had two free airline vouchers and a vacation window in mid-June, so I called American Airlines about six weeks in advance to check flights. Our comp tickets were the lowest of the low, because even with the availability to fly any time, any day of the week, we couldn't get to a single airport along the west coast, near any national parks in the northwest, not one of twelve airports serviced in Florida (TWELVE), and nothing along the eastern seaboard.

So three days and four phone calls and an hour and a half later on the phone with several American Airlines reps (the only way to book with these vouchers), I finally reached an agent who was as intrigued as I was frustrated by the challenge to get us on a flight to anywhere. She checked at least a dozen destinations without success, before throwing out, "Salt Lake City? I have two seats on a Wednesday morning flight, and two more seats to return a week later."

So two baby-mooners on a budget (twins due in 4 months), we booked a couple nights at a ski lodge in southern Utah ($65/night) followed by a super-cheap hotel room in Salt Lake City ($45/night) via Groupon. The ski lodge was beautiful. The super-cheap hotel room was under construction and under-staffed, and a little out-of-the-way, but safe, clean, and included complimentary "breakfast." A rental car for the week came to about $100, including taxes and fees.

I was so sold on Salt Lake City's low cost-of-living that I asked Wally to apply for jobs in the area. (Nothing's come up yet.) As it turns out Utah has a lot more to offer than just living on the cheap.

The more I researched stuff to do, the more convinced I was that we should just move there. It's an outdoor, active culture with family-friendly everything.

This is the site of the 2002 Winter Olympics.

Ski flying looks even more terrifying in person, staring down from the top of the launch. (Each ski lines up in one of those green tracks. See the video below of people with steep life insurance policies.) 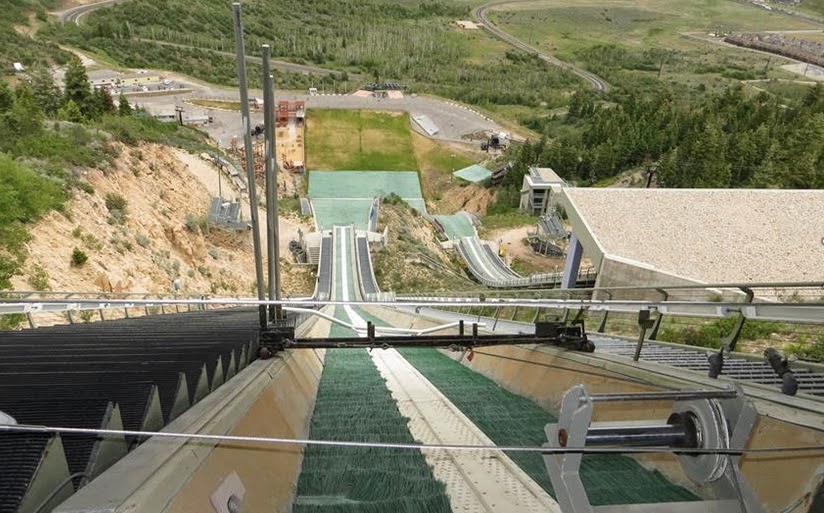 We stopped to watch a summer kids camp practice freestyle ski jumping into the pool. This is when I realized that kids in Utah are in a totally different culture than our pampered little Texans. Sure we have summers of horseback riding, hiking, and swimming. But these 8-year-olds are strapped in full-on ski suits jumping into a pool deep enough to drown, and then swimming to the edge with three-foot-long weights on each foot.

Wally took a chair lift up to the top of the hill and zip-lined back down over the ski jumps. And then he got to ride in a bob sled. It all looked really cool, but being pregnant (with twins) meant I was stuck at the bottom listening to strangers' tell all their twin horror stories. 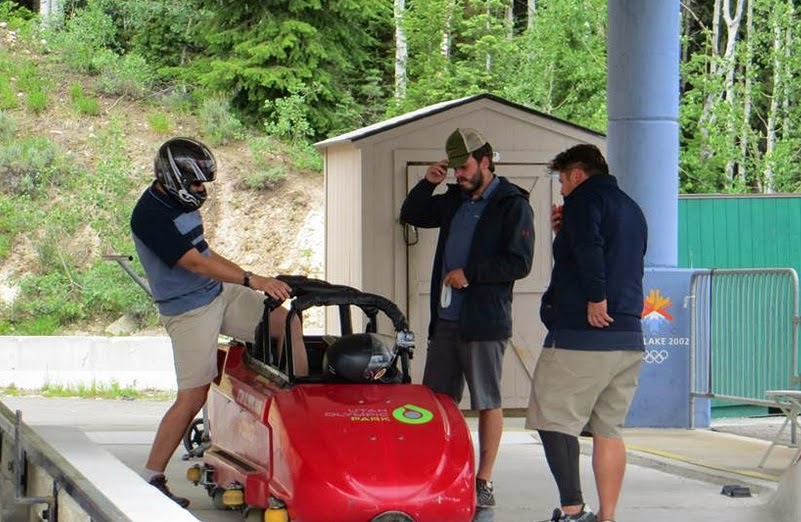 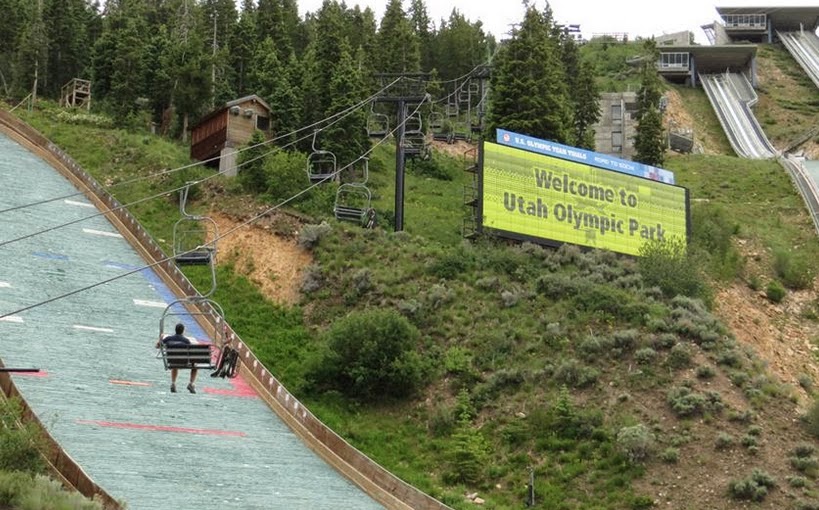 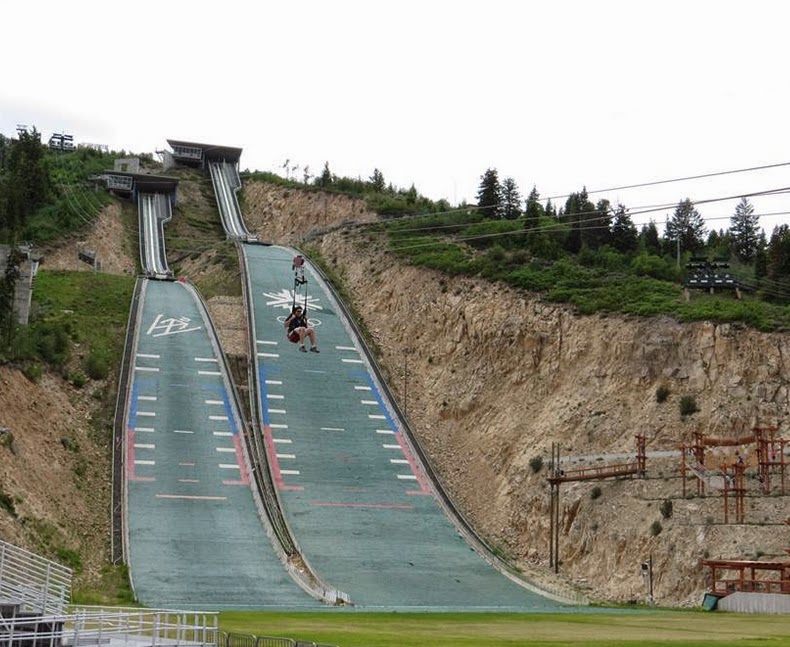 Luckily, we visited their line-up of expensive Main Street shops during a cold rain, so after $12 sandwiches, we squinted and speed-walked our way back to the car, and the trip stayed on budget.

This was straight-up terrifying. Never, ever, ever, ever, ever take your children here. Maybe occasional 3-foot chain link fencing was acceptable in 1919, but there's been a bit of erosion since then, and someone gets paid really well to bury stories like this.

Okay, truthfully, it was stunning. Grander than I expected. And the views from the restaurant on the north rim were beautiful.

Nonetheless, I'll never take our kids there. Because I love them. 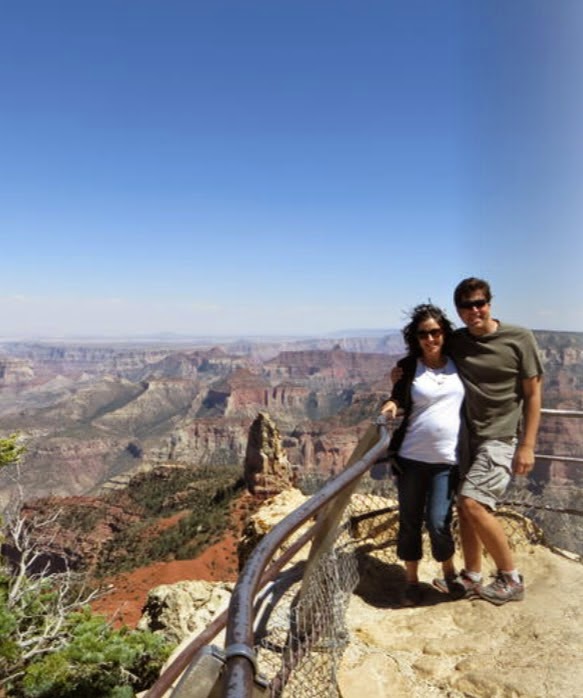 Interestingly, even though the canyon is only 10 miles wide, it's a 220-mile drive from one side of the canyon to the other. So driving south from Utah, we tried to meet up with my brother, who lives in Flagstaff, Arizona, on the south side of the Canyon, but it was just too far to drive.

Ski resorts in the summer are super-cheap, and we found a good deal on Groupon that came with a living room, kitchen, large bathroom, and bedroom. The on-site coffee shop, restaurant, and spa are open year-round, and there's lots of great hiking. For homebodies from Dallas, the views were stunning. 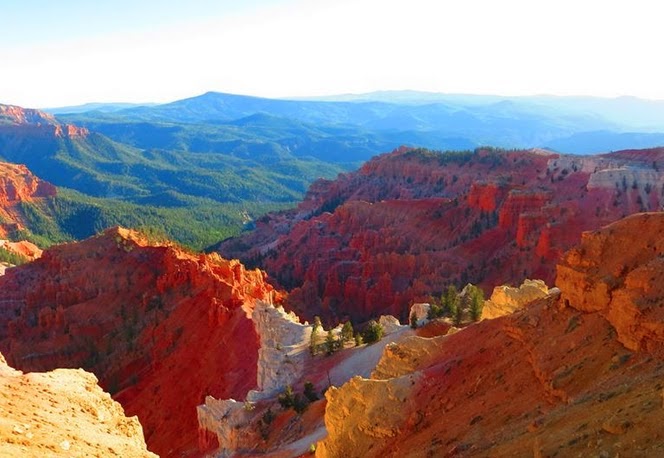 Bicycling is really popular on these winding, narrow mountain roads in southern Utah. But no one values the lives of cyclists very much (neither the drivers nor the cyclists). Every encounter turned into a game of chicken as we drove, with a tailgating SUV behind us and cyclists attempting to hold their own as we shared a lane of traffic on the freeway.

Speed limits are just suggestions. I think once the snow melts, it's just a free-for-all. Also, most 18-wheelers in Utah look like this, with extra trailers in a train behind the first:


The scariest driving moment for me was a section of road with snow melted across half of it. This twenty-foot patch in the shadow of a mountain had me absolutely panicked. (I wasn't even driving, luckily.)

We took our rental sedan on a rocky side road to hike Cascade Falls, a trail so popular that no road signs exist and the turn-off is not on any map.


This trail revealed that I'm either the worst helicopter mom ever, or Utah parents don't love their children. I hugged the wall most of the hike, with a hundred foot drop-off as the alternative, but four-year-olds were running up ahead of me, with their parents slowly following, oblivious to any fear or danger. You can see the trail and drop-off along the hillside below: 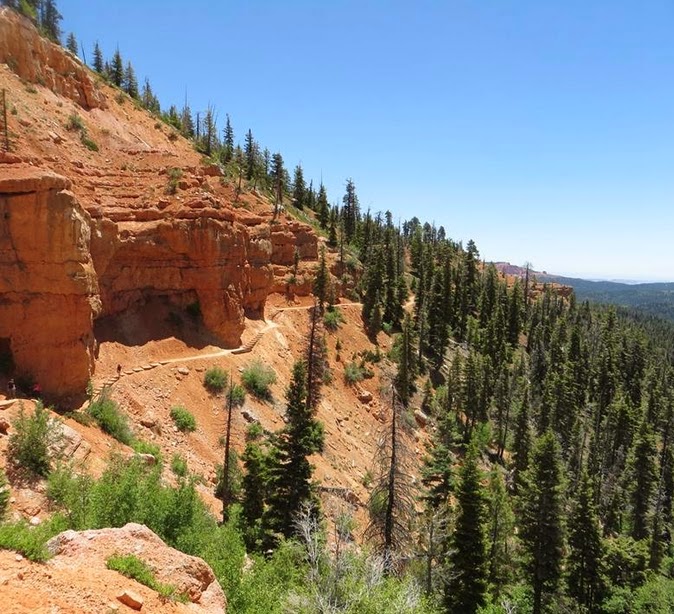 We checked out Diners, Drive-ins, & Dives for places to eat in Salt Lake City. So much good food! Moochie's Meatballs & More was obviously a local favorite, as there was already a line to the door for meatball subs when we arrived at 10:30 am. I embarrassingly held up the line trying to interpret their wall of sandwich options.


Maxwell's East Coast Eatery had an awesome Sunday brunch menu to go with their regular full menu. I took advantage of both, thanks to my pregnancy cravings, and enjoyed a yogurt parfait with pepperoni jalapeno pizza.

A beautiful city block in downtown Salt Lake City is dedicated to the Mormon Temple and affiliated buildings. We enjoyed dinner at The Roof Restaurant, which won my heart with an endless buffet and awesome views of the Mormon temple. (No coffee or alcohol, but with the pregnancy, I wasn't supposed to be drinking those anyway). 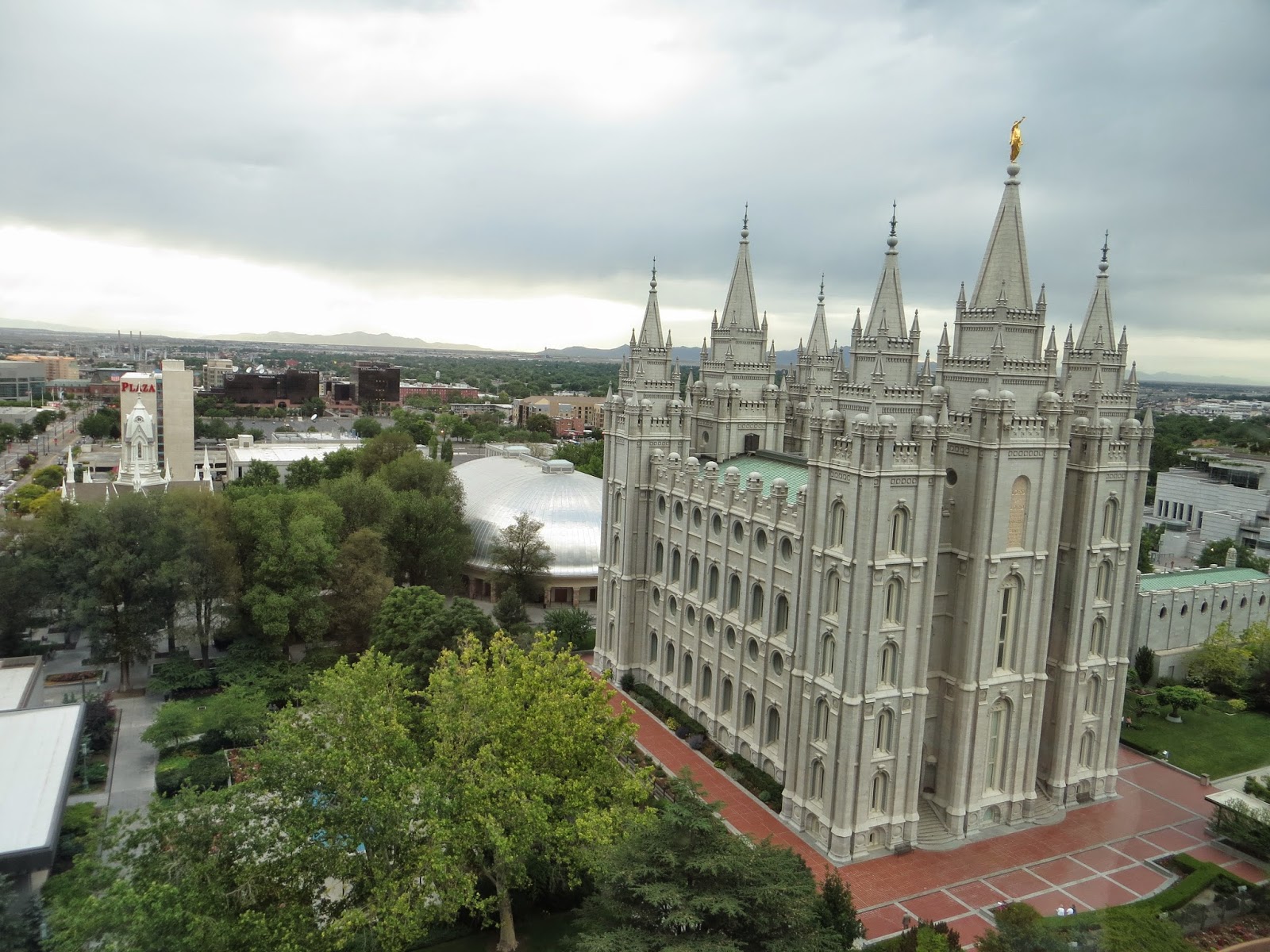 I imagine we felt about as out-of-place as Mormon visitors might at the Vatican. We were surrounded by beautiful landscaping and architecture and history, much of it foreign to us, but we could enjoy it in our own way. I couldn't get over how nice everyone was. Since we aren't LDS, we couldn't enter the Temple, but as we visited other buildings in the square, everyone was very welcoming. It was cool to see the Tabernacle, which looked familiar, since the annual televised Christmas special of the Mormon Tabernacle Choir is filmed there. 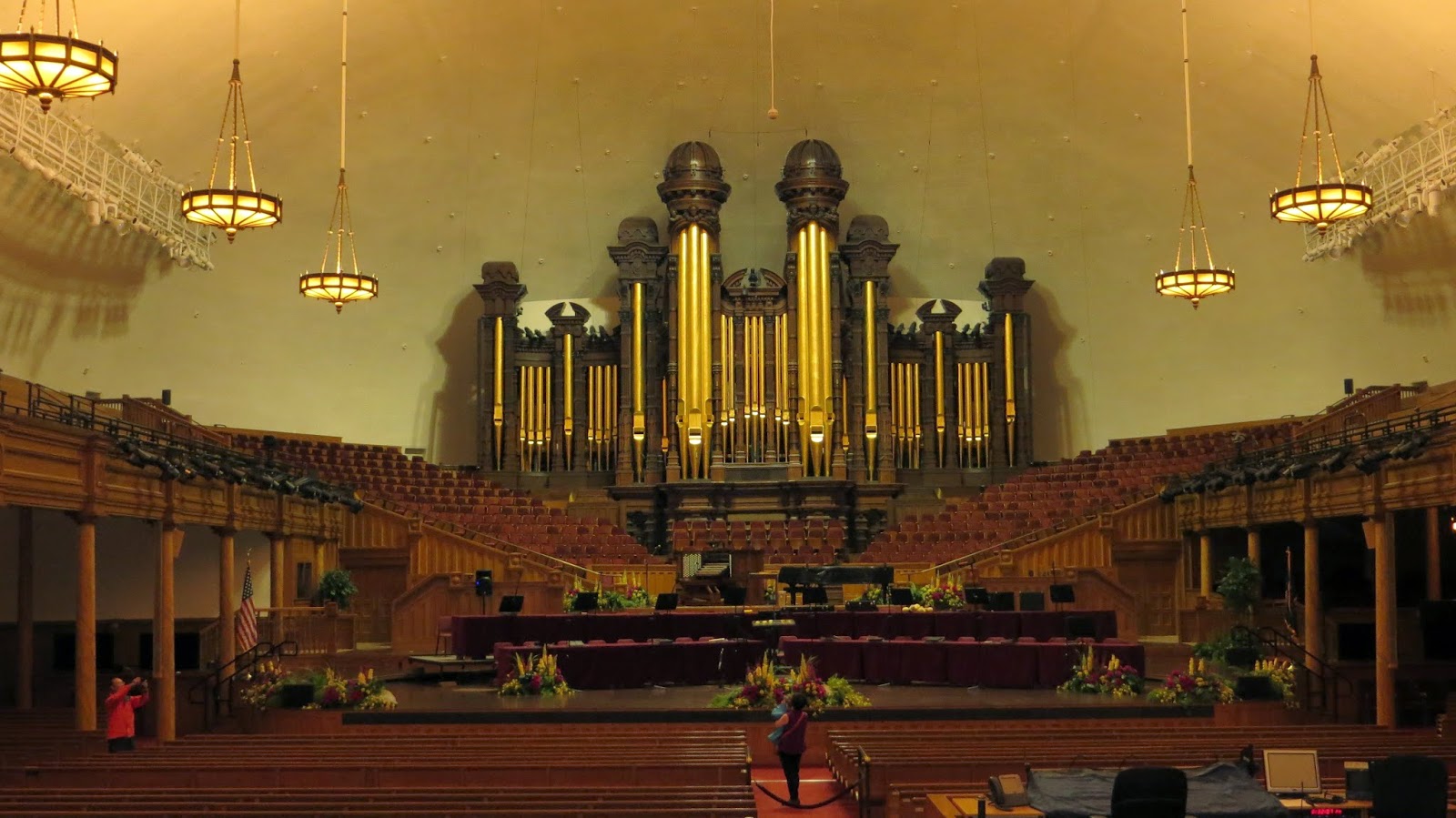 We took our little baby-moon trip just in time! I was about as big as could comfortably travel, even though I was cleared to travel through August.


We spent hours driving from Salt Lake City in northern Utah to Brian Head in southern Utah to the Grand Canyon in Arizona. Prior to our trip, my sister e-mailed a list of podcasts to download, and even sent us a CD of an NPR Snap Judgment segment on a girl who sent a stripper in her place to her ten-year high school reunion. But we haven't been able to finish a conversation since Joe was born in 2010, followed by Josh in 2011, so the hours of road-tripping in good company was just as fun as the sites and experiences!
on January 11, 2015