In Defense of Therapy Dogs, Peaceful Protests, and Millennials In General

Here we go again with overly dramatic protesters who can't seem to let things go and somehow twist everything into a personal attack against themselves. We've raised a hyper-sensitive generation who can't even handle one of the most basic tenets of our republic. A legitimately-elected new president has sent young people whimpering into safe rooms, clamoring for support groups, and wandering city streets en masse in protest. My God, they're so fragile!

You know who I go to when I've had a bad day? Millennial friends. You talk about people who get people.

Far from being the self-centered dysfunction of their generational stereotype, millennials are adaptable, sympathetic, and driven for a good cause. They volunteer, they give, they collaborate, they prioritize people over productivity (and usually accomplish both).

Most of these "ridiculous" millennials aren't protesting the legitimacy of the election. They recognize President-Elect Donald Trump is our new, duly-elected commander-in-chief.

But we raised this empathetic, young generation to identify with the fear and insecurity of others. With the anti-bullying movement of the nineties, we taught these children to befriend an outcast on the playground, to stand up for the weird kid in the neighborhood, and include everyone when they play games.

And now we're shocked that they grew into young adults with the same ideals?

Many of my friends and family voted for Trump, and among these good people, I cannot name a single one who actually represents ideals of misogyny, racism, or homophobia.

However, there were plenty of crisis moments throughout Donald Trump's campaign for president when Muslims, women, immigrants of Mexican and South American descent, and those who identify as LGBTQ, all had legitimate reason to fear a Trump presidency.

And while I do not condone any of the violence that has accompanied a small number of the mostly-peaceful protests across America, I applaud millennials for reaching out to those who feel marginalized, and standing with them in solidarity.

Yes, maybe we're cultivating a "soft" culture in a young generation that doesn't have the wherewithal to "suck it up and move on," who want to cuddle with therapy dogs, who crave group support, and who need to process feelings instead of feigning strength.

To me, this is both hopeful and wonderful.

Our participation-trophy culture of helicopter moms softening every blow, and anti-bullying propaganda from Pre-K has produced the most empathetic, peaceful, generous people, and they fill me with hope for the future of our country. 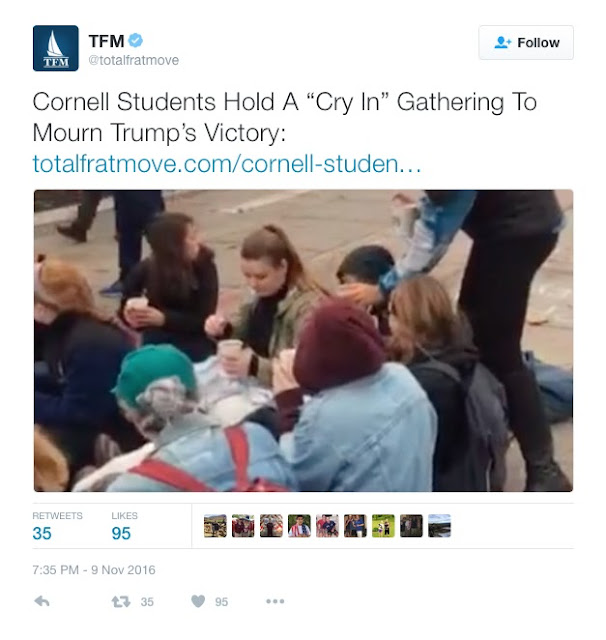 Email ThisBlogThis!Share to TwitterShare to FacebookShare to Pinterest
Labels: Government