Subsidiarity Is Not Libertarianism

An important, yet easily-overlooked, caveat to subsidiarity is its limited endorsement of low-level solutions. Subsidiarity prioritizes local oversight only to the extent that it can accomplish the common good.

If the local government is incapable, or unwilling, to sufficiently resolve the social or political problem at hand, it is a moral mandate of subsidiarity that the problem escalate to a higher level of oversight, repeatedly, until resolution is accomplished.

Subsidiarity is not a defense of states' rights; its end is social justice, not federalism.

Subsidiarity is not an excuse to underfund legitimate social welfare initiatives, in the name of "subsidiarity."

Subsidiarity is not an innate preference for private or non-profit over public programs.

Subsidiarity is not a mandate that all work for the common good be accomplished through voluntary charity as opposed to taxation.

Subsidiarity is not a belief that taxation is wrong.

Subsidiarity is not "rugged individualism," every man for himself.

Subsidiarity is not interchangeable with "small government."

Subsidiarity favors decentralization of power, but does not necessitate it.

To the point, if a public good cannot be accomplished at a lower level of government, it obligatorily begs higher intervention.

Regarding healthcare, a legitimate argument can be made, in the name of subsidiarity, that a single-payer healthcare system would be a simpler, better use of resources than most citizens' current arbitrary, inaccessible, unaffordable patchwork of care, primarily provided via for-profit insurance companies that are more accountable to shareholders than patients.

If affordable, accessible healthcare cannot be accomplished at a low-level -- due to disaffected politicians, lack of funding, lack of local health resources, geographically-concentrated disability needs, or any other incapacity -- the Catholic principal of subsidiarity mandates that this social problem escalate to the next higher level of intervention.
While left-leaning politicians might err on the first component of subsidiarity, that social and political work be done at the lowest level possible, right-leaning politicians might overlook the second: that a social or political problem must continue to escalate through higher levels of intervention, until it reaches resolution.

To be sure, the Church cannot be contained by any American political organization -- Republican, Democrat, Libertarian, Green, or even the American Solidarity Party, whose platform explicitly identifies as Catholic.

We must remain free to criticize and compliment our polarized national political ideologies at will, change our secular allegiances day-by-day, in response to their changing words and actions. And most importantly, we remain beholden to none, even if they quote our mantras, take photos with our clergy, or use our social teaching as pop-culture jargon. 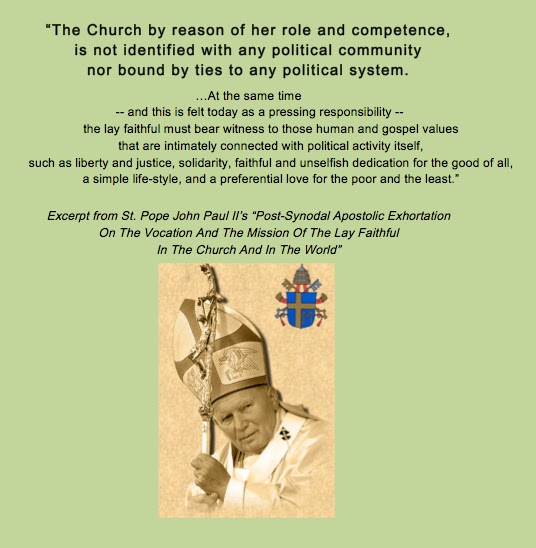