My vision is all hazy and cloudy from salt deposits on my contacts. Life has kept going, but these tears won't stop.

I scroll through her Facebook page to remember. Just a week earlier, she posted that she's praying for us. 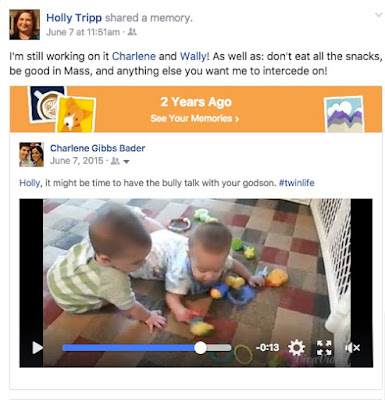 Man, did Holly ever pray for us.

She prayed when I went into labor at 28 weeks, and she said, "It's okay. They're not coming until September." The doctor laughed at her. But those twins were born on September 24.

She prayed when Wally needed a more stable job. And the next month we were selling our house and moving to Houston for his new job. She jokes that she didn't pray specifically enough and meant to keep us in town. But Houston's been good for us.

She prayed when I was stuck at the ER with our baby and no answers. Minutes after her reply text that she was praying, the doctor came in and started a whole new course of action that got us back home that evening.

When we had twin newborns, a 2-year-old and a 3-year-old, she showed up to Mass every single week to help. She would hold her godson, rocking him in the pew, often pacing the narthex or the back aisle when he grew fussy. He would eventually lean his face into hers, and fall asleep, a funny and endearing pose, repeated week after week.
When we moved to Conroe and added another baby, we didn't go to Mass together as a family for a whole year, except when Miss Holly was visiting. Otherwise Sundays were a patchwork of separate services with the older kids, while one of us stayed home with all the little ones.
She took the one decent family photo we have of all of us. None of us look like this anymore, but we can't seem to gather in one place, in simultaneous good moods, with a camera present. 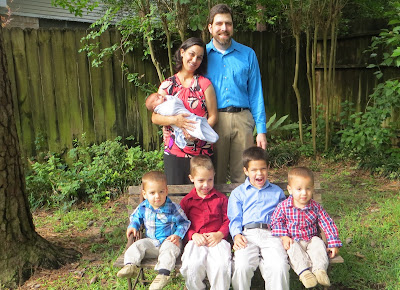 She was always texting encouraging articles or checking in to see how things were going. She knew when things weren't going well.

The first thing that moved into our new house was a framed photo of our family motto, made by Holly.

She did countless other small and big things that I would only underestimate if I tried to enumerate them.

Our oldest son had a dream as a preschooler that Miss Holly "walked him up the steps when he became a priest." He currently wants to be a math teacher, but I can't let go of that phrase. Holly's supposed to walk him up the steps.


We're supposed to meet for coffee when I'm in town in July.

We're supposed to take all the kids and go visit Father Joe for Mass at his new parish.

Here's Miss Holly coaching Jonathan to say "Father Joe." She had taken him out for ice cream and library time, and it was probably the best day of his 2-year-old life.

She's supposed to take her godson out on "Adventures with Miss Holly" days when we visit this summer.

I keep scrolling through Facebook, seeing her love of baseball, love of Church, love for friends, love for family. I see all the places where I "liked" or laughed at her posts, and I want to change all of the emojis to sad faces. She would laugh at that, if she were here. Mourning in the era of Facebook.

I take screenshots of everything. Our funny text exchanges are now memorials. 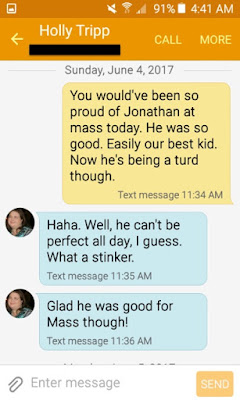 She was there the night we found out we were pregnant with Andrew. After a riotous night of laughing with friends, holding babies, watching baseball, and catching up on [then-Deacon] Father Joe's adventures in Rome, we shared with Holly what we had only known for a couple of hours.


Eight months later, Holly was drinking coffee next to me when my water broke at the kitchen table. I got up to call the doctor, and she reminded me to call Wally too, who was at work three hours away. As I waited on hold with the doctor's office, Holly offered to call Wally for me. I overheard her tell him that Andrew was on the way, as my mom and I walked out the door for the hospital. Andrew was born two hours later.


Her Facebook feed is all about others. It's encouraging words, friendship reminders, congratulations to her sister, her parents, and a myriad of friends whose only connection to each other is a love for Holly Tripp.

When we found out she passed away, suddenly, unexpectedly, and thankfully, without suffering, our group of texting friends began a spontaneous rosary. From our homes, hundreds of miles apart, our fingers worked through familiar beads and our hearts prayed through familiar prayers, even as our minds processed this unfamiliar reality. I meant to meditate on the sorrowful mysteries, of Jesus' suffering and crucifixion, but I unintentionally, maybe intuitively, began the rosary's joyful mysteries.

I ask Jesus to let me see her. She is gazing, supremely happy, undistracted at our Lord. She's distant though, maybe a prayer away, but no longer a text message away.

Even with tears that won't stop, my heart knows Holly is more fulfilled, more at home, more in her element than she could ever be in this world.

But I still want her here. 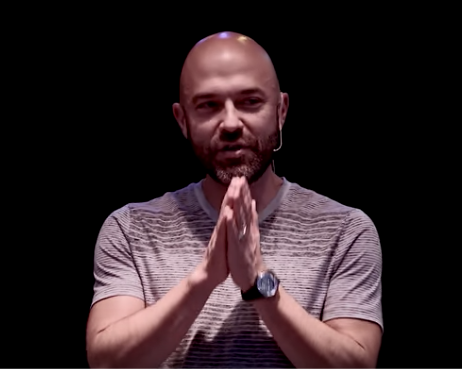