A Catholic school that removes religious statues to avoid offending prospective students is the PERFECT example of why we should remove monuments of Confederate generals in public spaces.

Can I spin anything? Probably. But hear me out, if you've got the patience or time or tolerance or indifference.

So rather than keep around old art that isn't an accurate representation of their culture, they moved it to the basement. Or maybe, hopefully, more appropriately, to a chapel somewhere for those who appreciate these things to continue appreciating them.


Should a "Catholic" school be obliged to offer a Catholic education? Or can it become just another private school with a saint's name on the bus?

To my thinking, this is no longer a question. Many Catholic schools are already more focused on financial solvency and academic recognition than religious formation.

That the final straw for parents was the removal of statues more than the removal of First Communion preparation for second graders the year before, simply demonstrates how we come to understand basic truths about our culture through the art it portrays.

And so, to the point at hand, do we have monuments in our country that inaccurately portray our cultural values and history?

Dinesh D'Souza claims that General Lee was an honorable soldier in the U.S. military with sympathies toward the Union who opposed slavery, but represented Virginia and the Confederacy out of loyalty to his state. 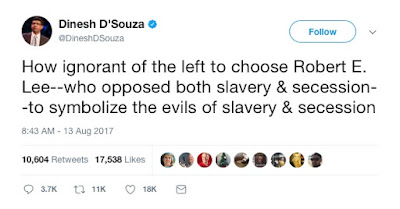 Despite this emotional (and de-bunked) appeal, we must consider the actions of General Lee: he took up military arms against the United States to support the institution of slavery.

If those who first installed these statues intended to honor Lee for being a great southern gentleman or brilliant military strategist, perhaps we'd see him sitting on a bench with his grandchildren, or standing proudly as a decorated soldier in the U.S. army (instead of the Confederate army).

If they meant to depict him as a strong moral leader who was personally against slavery, we might see him memorialized at the moment of declaring emancipation to slaves.

But instead, we see a Confederate military leader fighting on the side that defends slavery. And to reinforce this image, most statues were erected in tumultuous eras of race and integration in our country (Jim Crow segregation in the 1890s and Civil Rights Movement of the 1960s).

In context, it's clear that these monuments were established in public spaces with the purpose of intimidation and a reinforcement of racist laws.

Are we losing valuable public art, someone's priceless masterpiece, if we remove these statues?

Most are cheap tin mass productions from a factory. If we were to measure public art solely by material, cost, and source, Confederate monuments would be on par with stop signs and public handrails.

And finally, a tongue-in-cheek nota bene on the "historical" value of proud Confederate monuments: unless they're waving white flags of surrender, they're not even historically accurate.

To this point, the original installation of these Confederate monuments re-wrote history more than their removal ever could.

If we desire to honor the past in a way that we remember our history, as to not repeat it, we'd do well to take a lesson from Germany, which honors Holocaust victims with memorials throughout the country (as opposed to honoring the possibly well-intentioned leaders who victimized them).

And so, just as the nominally-Catholic San Domenico school in California came to realize its public art needed to represent its true ideals, we must ask ourselves: who are we and what represents us?
Endnote: Anonymous war memorials that honor the common soldier, whether Union or Confederate are in a category apart from public monuments to uniformed Confederate leaders. Memorials to the fallen are an appropriate and important piece of art in public spaces, a somber reminder of the human cost of war.