Maybe in modern times, the defecting disciples -- leaving Jerusalem three days after Jesus’ crucifixion -- would have paid for in-flight WiFi, created a “Disillusioned Disciples” Facebook group, and commiserated with all the other soul-searchers who just watched their revolutionary leader get executed by the state. 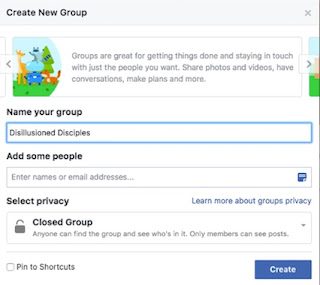 “We tried out that Jesus thing. It wasn’t for us. Some of our friends went kind of nuts with it. They thought they were talking to Jesus after he died.”

Maybe in modern times, Jesus would have anonymously logged in and joined their discussion. And just like on the original Emmaus walk, group members could verbally throw up all over him in their debriefing.

And then -- true to the form of most religious conversation on Facebook -- Jesus would respond to their deeply expressed, personal, painful experiences with insults:

If the Road to Emmaus had a block or report feature, the conversation may have ended there.

Thankfully, after his initial response -- “WTH, guys, you’ve got this all wrong” -- Jesus cuts straight to the root of all their questioning and starts a good conversation: if God is good, why is there suffering?

If this new religion is any good, why did the leader just get tortured and killed?

“Was it not necessary that the Christ should suffer these things and enter into his glory?” Jesus asks (still anonymous in the thread).

Necessary? Damn, this religion is even stupider than we thought. Not only is suffering unavoidable, but this guy says it’s necessary?

Maybe the disciples initially rejected Jesus’ comment that his suffering led to his glory. (I would have.)

Jesus doesn’t gloss over the suffering. He doesn’t pretend it isn’t real. He doesn’t say that the truly holy among us will avoid suffering.  doesn’t advocate any of the things we do to avoid suffering –- hiding away, social performance, collecting new time-saving gadgets, hoarding up money at any expense, pursuing every latest health craze, forcing those around us to conform to our comfort levels…

Jesus, on the walk to Emmaus, looks back on the success stories of history -- Abraham, Sarah, Moses, Rahab, Bathsheba, Jeremiah, Daniel -- and traces how divine intervention turns suffering into glory over and over and over. Or at least, that’s what I imagine he talked to them about.

For some reason, scripture tells us more about what the disillusioned disciples said than how Jesus responded. Maybe because we can all relate to them?

As he talks with the men who have decided to walk away, Jesus doesn’t sell his new religion as a way to achieve comfort, recognition, deference, appreciation, worldly success, or even acknowledgment. It's not military conquest. It's not cultural superiority.

On the walk to Emmaus, Jesus tells the history of suffering and shares the scriptural forecasts of future suffering.

And yet, something in Jesus’ words -- the disciples would later recall -- made their hearts burn within them.

They keep talking with him, all the way to their home in Emmaus. And once they get there, they ask him to stay.

(I imagine this would be the point at which Facebook groupies unilaterally assign Jesus an administrator role in the group, to make sure he sticks around.)

Jesus, then, gets to the heart of what it is to follow him: they break bread together, just as he did four days earlier at the Last Supper.

And in the breaking of the bread together -- this daily, hourly, international act that interrupts every moment in time to experience the eternal breaking of his Body once, for all -- they finally recognize Jesus with them, that He's been with them the whole time.

And they’re so floored that they immediately hike all the way back to Jerusalem to tell the others.

(This is where all the FB comments just become people tagging their friends to come read the thread.)

Jesus hardly lived a comfortable life. He died a torturous death. He says we'll suffer too. Even those most insulated from physical discomfort by riches and prestige will experience suffering.

Mother Teresa once said, "The poverty in the West is a different kind of poverty -- it is not only a poverty of loneliness but also of spirituality. There's a hunger for love..."

Through Jesus, we see a God who suffers with us, yet also, a God who turns suffering into redemption and resurrection.

I don't actually think Jesus is waiting anonymously in a religious-themed Facebook group to start a revolution. If anything, he's waiting with us, even now as we scroll intently through our digital feed, waiting for us to shut off our computers, ask him our questions, and listen.

Yelling In Marriage And My Grandma's Damn Dog

I told my grandma once, “I don’t know why you married him.”

She didn’t answer me.

Poppop was unpredictable and yelled a lot.

We continued to sit in silence on the cement back steps, watching for the dog I’d accidentally let loose into hill country.

Mommom collected the strangest serial assortment of reject pets. Their issues were as varied as they were concurrent -- neurosis and mange, aggressive with no bladder control, astraphobia (fear of thunderstorms) and kidney failure, people-hater, compulsive vomit-er, destroyer-of-all-things.

This dog, Drifter, was a runner. He would dig, jump, pull, dart, recklessly, effortlessly, tow me scraping down the street behind him. I still self-consciously cover the scars on my knees from Christmas 1994, when I underestimated his strength to race me down the block in rollerblades.

Drifter wasn’t made for neighborhood walks or leashes or fences or city ordinances. He was made to run.

Unlike most of Mommom’s awkwardly ugly rescue pets, Drifter was a beautiful specimen. When he ran, the prairie would cling onto his long, rust-colored fur like Velcro.

And after he had chased every rabbit, deer, and leaf for acres, he’d trot back home and sit calmly by the front door, until someone noticed.

The rest of the day he’d lay passed out, exhausted, while Mommom, unbothered, brushed fleas, ticks, and burrs out of his matted coat with "Lawrence Welk" or “Meet Me in St. Louis” or “Moonstruck” playing across the room.

And so, we waited on the back porch for that stupid dog to come home. And I told Mommom that Poppop wasn’t a good husband, because he yelled too much.

I wish I could take back my words.

I didn’t know about things like PTSD, or that peculiar Southern etiquette where niceness isn’t necessarily goodness –- and goodness, for sure, isn’t niceness. A 9-year-old doesn’t think about how the lukewarmness of forced civility might be more dangerous to marriage than the discomfort of expressed anger. I also didn’t know that, in the 50s, if a woman got pregnant, she got married, whether a man was nice and civil or loving and angry.

Poppop was my first exposure to cuss words. “Who let the damn dog out?” came as easily as “The damn politicians…” over dinner. To my sheltered ears, it was the worst possible offense. Now I just smile in solidarity with my late namesake – his first name is Charles -- any time I find myself muttering, “Dammit, dammit,” over slammed fingers or a full trash can or an empty coffee carafe.

Mommom had the composure and self-confidence to effortlessly dismiss Poppop's occasional, tempered outbursts.

And he would.
would climb the steps up to his office add-on, overlooking miles and miles of hill country, and turn on his classical records, so they echoed through the whole wing of their house. He would play “Peter and the Wolf,” if we asked him, and the day would go on as calmly as before.

At least until the damn dog escaped again. 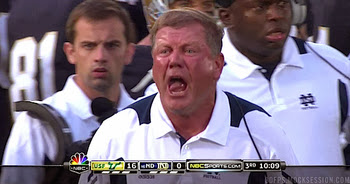