Did Beto Argue With A Catholic Priest About Same-Sex Marriage?

There's a video circulating from 2011 with Beto purportedly arguing with a priest.

I'd encourage anyone who's curious about the situation to watch the entire 12-minute interaction. Simply reading a summary, commentary, or even the transcript can't provide context or content for honest discussion of the issues raised, namely what family structure should qualify for spousal benefits of employer-sponsored health insurance?


Was it an argument? Not really. The priest was pastoral and well-intentioned. Beto was respectful and concerned. Both spoke calmly and sincerely.

The city council issue at stake is not whether same-sex unions should be legalized or recognized as marriage. This is a discussion on whether families of same-sex city employees should receive health insurance coverage.

In this interchange, I believe the priest, Father Michael Rodriguez, mistakenly applies the Church's teaching on marriage to an issue on which the Church has no official teaching -- whether health insurance should be extended to cover people in what would be considered "invalid" marriages.

For some reason, Fr Rodriguez chose to question whether gay families, in particular, should receive health care, but his reasoning -- that they don't conform to a Catholic definition of marriage -- actually questions whether any city employee's family that isn't considered valid, according to Catholic teaching, should receive healthcare.

The Catholic Church rightfully limits the sacrament of matrimony, but it doesn't just exclude gay people. According to Catholic teaching, any heterosexual or homosexual person who can't or won't commit to total, free, fruitful, faithful love is not able to commit to a sacramental marriage.

And yet, when it comes to whether city employees should receive health insurance for their families, the line isn't drawn at whether marriages practice "free, total, faithful, and fruitful" vows or even whether marriages are considered valid by the Church. For some reason, Fr Rodriguez draws the line at gay or straight, making an exception for many illicit and invalid heterosexual marriages, yet excluding gay families.

For example, consider heterosexual spouses who were previously divorced from a Catholic sacramental marriage and are now civilly "married," thereby engaging in extramarital sex with their new "spouse," living in a relationship that the Catholic Church doesn't recognize as marriage with the further belief that this relationship could never even become a licit marriage in the future. According to Fr Rodriguez' reasoning, they should not be eligible for employer-sponsored family health insurance, because they are not in a real marriage.

Please, please do not read what I just wrote as condemnation. I know that marriage issues today are complicated, and many good people, Catholics included, are navigating difficult family situations. My point in using this illustration is simply to indicate that these issues affect both gay and straight people, yet civil policies are often applied discriminately against only gay people -- as in this case of employer-sponsored health insurance.

Would Fr Rodriguez suggest a couple married by the Church who intended from the beginning to contracept not qualify for employer-sponsored health insurance? Their marriage is not valid. Would Fr Rodriguez ask the city to deny family health insurance coverage to a husband who cheats regularly on his wife because he never intended the "faithful" part of his vows? According to Catholic teaching, their marriage is not valid. Should city employees submit annual state-of-our-marriage disclosures to ensure that they're still living out valid marriage vows as a prerequisite for family coverage by their employer-sponsored health insurance?

My point is simply that if we're going to base family health insurance coverage on whether a marriage is valid, there are a lot more families that need to be excluded than just gay people.

As I've stated before, I'm actually against any kind of employer-sponsored health insurance as the point of access for healthcare in our country. It's bureaucratic, discriminatory, costly, unnecessary, and leads to all kinds of moral confusion about employer coverage obligations. But if we're going to insist on running with such a ridiculous system, then, at the very least, let's discriminate against everyone equally.

Now, if we're dredging up this Beto-priest video with the intent to focus on the completely separate talking point of whether same-sex marriage should be legal in Texas, attempting to pit Beto O'Rourke and Ted Cruz against each other, I'll save you some time: Beto supports it, and Cruz said he's personally against it but he'll support same-sex marriage if the state votes for it. Given that the majority of Texans support same-sex marriage, it would seem to be a non-issue for both Beto and Cruz in this election cycle.

If you'd like to consider other issues that Beto and Cruz actually disagree on, I've written on education, the economy, healthcare, criminal justice, immigration, student loans, and higher education over here. 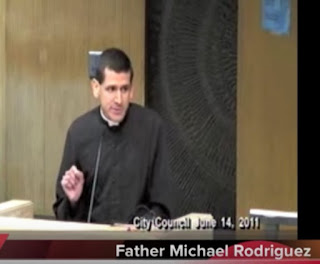