Sex and Capitalism: The Encyclical That Preceded Humanae Vitae

I mistakenly opened a bio of Blessed Paul VI while rotely skimming my daily scripture app.

Most remembered for writing Humanae Vitae -- the Church document that condemned artificial contraception in the middle of the sexual revolution -- I was surprised to read that he also worked extensively to improve employer/employee relations. 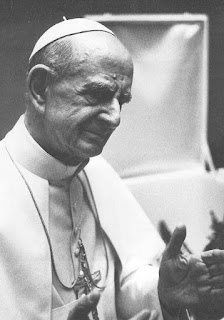 Ambrosius007 at English Wikipedia [CC BY-SA 3.0], Wikimedia Commons
It fascinates me that the same pope who wrote a famous encyclical against contraception -- what some consider to be the litmus test of orthodox Catholicism today -- also wrote extensively about the dangers of capitalism and a free market economy.

For some reason, although both messages underscore the dignity of every human person and the importance of living out that dignity within our marriage and work vocations, we don't seem to take Blessed Paul VI’s economic message to heart the same way we've dissected the one about sex.

Written in 1967 (only a year prior to Humanae Vitae), Blessed Paul VI's encyclical Populorum Progressio methodically addresses multiple offenses against human dignity and development caused by wealth disparity, global poverty, nationalism, the failure of developed nations to welcome immigrants, the refusal to tax luxury as a means of wealth redistribution, and the monetary waste of a global arms race.

"In short, 'as the Fathers of the Church and other eminent theologians tell us, the right of private property may never be exercised to the detriment of the common good.' When 'private gain and basic community needs conflict with one another,' it is for the public authorities 'to seek a solution to these questions, with the active involvement of individual citizens and social groups.'" - Blessed Pope Paul VI, Populorum Progressio
Perhaps, (one might rationalize), we can dismiss the ideas of Populorum Progressio, while still embracing Humanae Vitae, since one addresses economics while the other carries the infallible ecclesial authority of teaching on faith and morals. And yet, to say the focus of Populorum Progressio is economics would be like saying the heart of Humanae Vitae is healthcare.

Thankfully, Blessed Paul VI clarified the weight given each of his encyclicals, freeing us from the burden to argue about it 50 years later. In 1964, he wrote a short encyclical on the Church (Ecclesiam Suam), clarifying within the first couple paragraphs that it was simply a friendly letter, not intended as “a solemn proclamation of Catholic doctrine or of moral or social principles.”

Contrary to the introduction of that 1964 encyclical, Populorum Progressio emphasizes the importance of its message straight from the outset (emphasis mine):

"With an even clearer awareness, since the Second Vatican Council, of the demands imposed by Christ's Gospel in this area, the Church judges it her duty to help all men explore this serious problem in all its dimensions, and to impress upon them the need for concerted action at this critical juncture."
Following this commendation, Blessed Paul VI directs his readers to five other Church documents written by three recent popes on these same economic topics. While some have faulted Blessed Paul VI for writing too weak an encyclical in Humanae Vitae – failing to cite centuries of Sacred Tradition, the papal solidarity of past encyclicals, natural law, and Sacred Scripture in his arguments against artificial contraception – none of these oversights occur in Populorum Progressio. The economic issues highlighted are so paramount to human dignity that Blessed Paul VI emphasizes he is the fourth modern pope to speak on them.

The following excerpt from Pope Leo XIII’s encyclical Rerum Novarum was written nearly 150 years ago and cited by Blessed Paul VI in Populorum Progressio. Its pastoral warnings sound similar to today's concerns of anti-union legislation, willfully clueless employers, and the unchecked greed of business monopolies. You'll notice Pope Leo XIII believed so strongly in the necessity of worker unions that he likens them to a sacred "ancient religion," now overlooked:

"In any case we clearly see, and on this there is general agreement, that some opportune remedy must be found quickly for the misery and wretchedness pressing so unjustly on the majority of the working class: for the ancient workingmen's guilds were abolished in the last century, and no other protective organization took their place. Public institutions and the laws set aside the ancient religion. Hence, by degrees it has come to pass that working men have been surrendered, isolated and helpless, to the hardheartedness of employers and the greed of unchecked competition. The mischief has been increased by rapacious usury, which, although more than once condemned by the Church, is nevertheless, under a different guise, but with like injustice, still practiced by covetous and grasping men. To this must be added that the hiring of labor and the conduct of trade are concentrated in the hands of comparatively few; so that a small number of very rich men have been able to lay upon the teeming masses of the laboring poor a yoke little better than that of slavery itself."
And from the same document, regarding a just wage making it possible for a thrifty parent to comfortably support a family (particularly relevant in our times when a minimum wage employee can’t rent a two-bedroom apartment anywhere in the US, much less own private property):

“…the first thing of all to secure is to save unfortunate working people from the cruelty of men of greed, who use human beings as mere instruments for money-making… If a workman's wages be sufficient to enable him comfortably to support himself, his wife, and his children, he will find it easy, if he be a sensible man, to practice thrift, and he will not fail, by cutting down expenses, to put by some little savings and thus secure a modest source of income. Nature itself would urge him to this.”
And this theme continues in Quadragesimo Anno, an encyclical written by Pope Pius XI nearly 100 years ago -- and also referenced by Pope Paul VI in his pre-Humanae Vitae encyclical. This reads as a timely reminder in an era when the average CEO earns as much in a day as the average worker earns in a year (emphasis mine):

“Therefore, with all our strength and effort we must strive that at least in the future the abundant fruits of production will accrue equitably to those who are rich and will be distributed in ample sufficiency among the workers…”
Could we say Blessed Paul VI was mistaken? Is his prophetic voice in Humanae Vitae -- predicting increased marital infidelity and the objectification of women -- any less accurate than his prophecies in Populorum Progressio -- predicting increased disparity between rich and poor, social unrest, and drifts toward totalitarian ideologies? Do we not see the reality of these warnings happening today?

He goes so far as to reference Pope Pius XI's admonitions about the errors and poison that thrive in a poorly regulated free market (emphasis mine):

"...the right ordering of economic life cannot be left to a free competition of forces. For from this source, as from a poisoned spring, have originated and spread all the errors of individualist economic teaching. Destroying through forgetfulness or ignorance the social and moral character of economic life, it held that economic life must be considered and treated as altogether free from and independent of public authority, because in the market, i.e., in the free struggle of competitors, it would have a principle of self direction which governs it much more perfectly than would the intervention of any created intellect. But free competition, while justified and certainly useful provided it is kept within certain limits, clearly cannot direct economic life - a truth which the outcome of the application in practice of the tenets of this evil individualistic spirit has more than sufficiently demonstrated."
It's hard to believe this was written in 1931. As some American politicians push for less regulation and increased free market forces under the guise of "job creation" and "pro-growth initiatives," typical workers suffer, and as Pope Pius XI warned, this brings the destruction of the "social and moral character of economic life."
In each of the aforementioned encyclicals, our popes warn against the secular appeal of socialism as a solution to the moral perils of capitalism (while recognizing that the masses often pursue socialism as a cure to the unnatural "evil individualistic spirit" empowered by a profit-driven economic system). Thankfully, these encyclicals also offer the most effective prevention of socialism, or government-appropriation of private holdings: ensuring the ability for every person to afford their own private property on a livable wage. Given this, what are we doing to make home ownership an accessible dream for everyone?

(While recognizing the dangers of socialism, the Church in no way condemns taxation and recognizes the good of public services overseen by government, necessitated by taxes. As I've written previously, the Catholic concept of subsidiarity is not at all the modern-day political approach of libertarianism.)

After reading these passionate papal letters -- steeped in arguments of Scripture, Tradition, magisterial consensus, and natural law -- I’m convinced that we, as Catholics, must venture into the morally bankrupt inner cities of our country (and I don't mean the public housing sector). We need to protest Wall Street and their lobbies, secured in buildings so fancy with money so loose they sue each other over rights to sunlight. They need the Good News. Their souls are in peril.

Sometimes in the political polarization of our times, it’s easy to assume that our religious institutions must ally step-in-step with the platform of a deified political party. Reading through these encyclicals reawakened my faith in the independent good counsel of our Church.

If we find one or the other of these encyclicals -- written only a year apart by the same blessed pope -- difficult to accept in contemporary American life, we're not unique. Among the social and political divisions in our country, these documents propose a strange juxtaposition and yet, also, a consistency that's lacking in secular political ideals.

If there is a litmus test for Catholic orthodoxy, it's not soliciting one encyclical or another and holding it over the heads of dissenters. Both Humanae Vitae and Populorum Progressio, gifted to us by Blessed Paul VI, ask great personal sacrifice in service to the God-given dignity of every person.

Through these papal letters, we come to better understand a God who governs the nations of the earth while also speaking into our most intimate of relationships, a God who entrusts us with the overwhelming call to defer to one another in every sphere of our lives: our families, our workplaces, and our world.