Is Feminism To Blame When Men Fall Short?

At some point, in between our first spoken word and first professional email, woman’s language becomes spattered with cushions of irrelevant apology.

This phenomenon is distracting enough that Chrome designed a plug-in – specifically with women in mind – to help us eliminate the non sequitur verbal clutter of conditional language (and punctuation!! And emoticons :-O).

Why might women experience pressure to constantly and unnecessarily apologize for fault that isn’t theirs? Let’s review some recent issues that reflect an extensive cultural problem.

On sexual assault, consider the unfortunately popular idea that the root problem of rape culture is drunk women:

Adopting this perspective, if a girl is exhausted because she pulled an all-nighter to study, would she carry partial blame for the rape committed against her? After all, we don’t have full control of our senses when fatigued and studies have shown that sleep deprivation can cause impairments equivalent to those caused by intoxication from alcohol. Why was she around men when she was tired? What did she think would happen?

God forbid these men get married and have to be in bed next to a sleeping wife. A passed-out woman, right there -- in her pajamas no less! It’s like she’s asking to be raped.

(When I’m really tired, my husband doesn’t have sex with me because he knows it wouldn’t be consensual. He also recognizes that it wouldn’t be mutually enjoyable, and he prioritizes my pleasure as equal to his own.)

If not women, then who is to blame when men act out the worst version of themselves?

We have two parties at fault: 1) individual men who make individual choices, and 2) a toxic culture that grants them permission to behave poorly if they aren’t treated with deference by a fearful, dependent, and insecure member of the opposite sex. 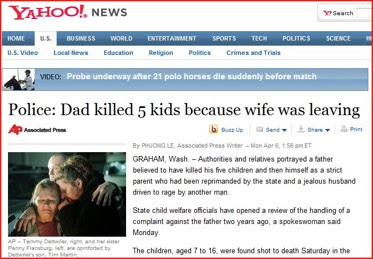 Due to society's implicit bias to blame women when men act out, this reporter headlined an article on domestic abuse and murder with, “If she had just been a good wife despite his domestic abuse, this man would not have killed his own innocent children.”

A brave, business-savvy, unmarried woman is no more a threat to true masculinity than a fearful, uneducated, emotionally-needy woman is an affirmation of it, because the one (virtuous manhood) does not depend on the other (deferential women).

Going a step further: a confident, competent, married woman who chooses to view her husband as protector, provider, and lover -- incidentally, this describes me -- is neither the source of his manhood, nor the responsible party for his personal choices in exercising virtue or vice.

Please read the rest -- blaming women for men's violence, unaddressed social issues, poor character development, inability to be godly, delayed adolescence, aversion to marriage, and avoidance of children (and pondering which other factors might be more likely to blame) -- over at FemCatholic!