On April 28, we celebrate Saint Gianna Molla. Born in 1922, Gianna was a doctor, wife, and mother whose life of heroic virtue culminated in a choice to die so her unborn child could live. But how could Gianna make a choice that would leave her other kids motherless? Did she marry a perfect husband? Have perfect children? Just want others to suffer?

A fuller understanding of Gianna's life helps us appreciate both her humanity and her sainthood:

After giving birth to her third child, St. Gianna wrote in a letter to her sister that the oldest son (age 3) promised to be sweet to the newborn, but not his toddler sister:

"[I] won't whack the new kid, but the old kid, yes."1
2. St. Gianna ensured fun and self-care were an integral part of her life as a doctor, wife, and mother.

"...she was―in her affection, in her energy, in attentiveness to the children and to me, in simplicity of manner, in care for herself, in knowing how to balance duty and joy for life, religious practice and time for concerts, theater, skiing: to sum up, in her typically feminine ability to know how to fulfill herself completely and harmoniously."2
3. St. Gianna reminded her husband to help with the kids.

When their children were young, Pietro would often get away for time alone on retreat. Gianna wrote to him, advocating for their family, reminding her husband that she and their children needed his presence at home.3

4. St. Gianna reminded her husband not to work so much.

"...I worked too much: every day until late, including Saturdays, and many times Sunday, too. She said to me right away: 'That's not right; it's good to work, but you also have to rest and have fun.' ...She taught me to live better."4
5. Pietro and St. Gianna often requested and happily accepted help with childcare.

Whenever Gianna could get a break from her work as a pediatrician at a daycare and school, she joined Pietro on business trips and vacations while the kids stayed with relatives. Gianna's older children also visited extended family for several weeks at a time when she gave birth.

After Gianna passed away, her children were cared for by their dad, a live-in nanny, their paternal grandmother, aunts, and boarding school. Pietro wrote:

"Gianna's relatives and mine were most generous and available. The newborn was immediately the object of particularly affectionate care."5
6. St. Gianna Molla didn't accept death passively.

When a benign uterine tumor was discovered during her sixth pregnancy (following two miscarriages), Gianna's doctors did everything possible to save both her life and the life of her unborn child.

She could have chosen to do nothing invasive, allowing both the tumor and the child to grow. She could have chosen a hysterectomy, in good conscience, which would have removed the tumor while also causing the death of her unborn child as an unfortunate secondary effect. Gianna proactively chose to have the tumor surgically removed while two months pregnant and to continue her pregnancy, hoping the best for both herself and her child.

She recognized the pregnancy would be risky, writing:

"This time it will be a difficult delivery, and they may have to save one or the other—I want them to save my baby."
Seven months after the tumor was surgically removed, Gianna gave birth to a healthy baby girl. It seemed the efforts to save both mother and child were successful. Sadly, a week later, St. Gianna died from septic peritonitis, an infection from the C-section delivery.6

7. St. Gianna is beatified, not only as a martyr for her youngest child, but for the Christian witness of her entire life.

Some have criticized Gianna, suggesting she lacked virtue as a mother because she worked outside the home as a pediatrician. This can lead to the wrong assumption that Gianna's sainthood is based solely on her willingness to die for her unborn child.

In an interview, Gianna's husband clarified that her beatification came about because her "whole life was an uninterrupted act of Christian witness":

"When Gianna died, only her sacrifice was known. ...initially, they thought about the extraordinary act of a martyr. When her life was examined later, Gianna's writings were read and studied. They realized that Gianna's whole life was an uninterrupted act of Christian witness, of grace. Thus, this more profound understanding has led to the final picture of a woman, of a mother beatified precisely for the way in which she knew how to live every phase of her life."7
8. St. Gianna's husband didn't know the extent of her faith until after she died.

In reflecting on the process of beatification for his wife and the discovery of her journals, Pietro wrote:

"...she never spoke to me about the degree of her involvement in Catholic volunteer work. Therefore, thanks to the process [of beatification], I have been able to review Gianna's life. I have been able to know her writings, which are very important to understand her human and religious personality."8
9. St. Gianna's daughter, Gianna Emanuela, who was saved by her mother's decision not to have a hysterectomy while pregnant, has dedicated her life to helping society understand the importance of supporting families.

In her advocacy work, Gianna Emanuela recognizes that her family survived after her mother's death because they were supported by an expansive network of friends and family with hands-on help. Gianna Emanuela lists several aunts and uncles from both sides of the family, grandparents, friends, and a nanny who lived with them for 14 years. In gratitude for her mom's sacrifice, Gianna Emanuela works full-time advocating community support for families and mothers.9

St. Gianna Molla, pray for us! 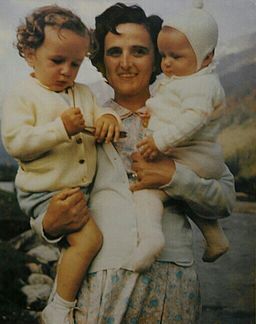