Burial Cloths In An Empty Tomb: A Reflection on Easter Sunday

Wally and I were invited to share a reflection on our parish blog on the Mass readings for Easter.

We laughed while reading the Easter Gospel passage. Right in the middle of the most important story John will ever tell—the Resurrection of Jesus—he mentions three times in three sentences that he arrived at the tomb first:

"They both ran, but the other disciple ran faster than Peter and arrived at the tomb first; he bent down and saw the burial cloths there, but did not go in. When Simon Peter arrived after him, he went into the tomb and saw the burial cloths there, and the cloth that had covered his head, not with the burial cloths but rolled up in a separate place. Then the other disciple also went in, the one who arrived at the tomb first, and he saw and believed." (John 20:4-8, emphasis added)
As a parent, I want to tell John to stop bragging: "We get it. You got there first. Congratulations!"

But John's words are more than just bravado at being a good sprinter. (One writer estimates they ran about 0.75 miles from the Upper Room to the Tomb.) John's details about the race provide supporting evidence for Jesus' Resurrection: John arrived first, but didn't go into the Tomb. Nothing was touched until Peter arrived. Once they were both at the Tomb, Peter went inside, followed by John, and they witnessed Jesus' burial cloths together.

Roman leaders were pushing a counter-theory, suggesting Jesus' disciples stole his body to fake a resurrection. Sounds like an easy scam: sneak in, steal the body, make up a story about finding the tomb empty, and start a religious revolution!

If you were going to steal a dead body from a mausoleum, how would you do it? Would you grab the body and run? Or would you take the time to unwrap cloths wrapped around the body and then sneak off with a stiff, naked corpse?

John's strange description of used burial cloths in an empty Tomb offers evidence for early Christians to realize Jesus' body wasn't stolen; He truly resurrected. John understands people might doubt Jesus' ability to overcome death. He doubted it himself until discovering the burial cloths in the Tomb, and then "he saw and believed" (John 20:8).

We have an opportunity to insert ourselves into the Gospel narrative this week. John often uses phrases like "the disciple," "the other disciple," or "the disciple whom Jesus loved" instead of his own name as he writes, which allows us to imagine ourselves in the story. (See John 13:23, John 19:26, John 20:2, John 21:7, John 21:20.) How would you react if you arrived first to Jesus' Tomb and encountered the burial cloths with Peter? 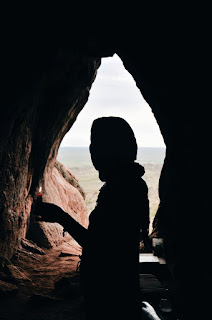